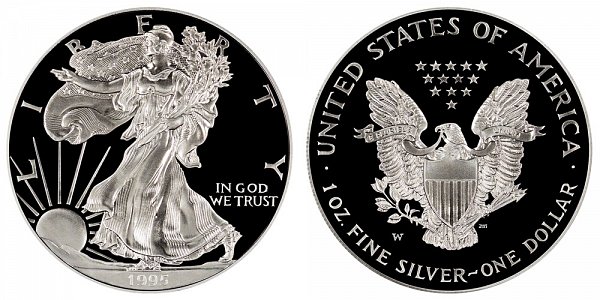 The 1995-W American Silver Eagle Proof coin was produced to commemorate the 10th anniversary of the American Eagle coin series. This is also the first year that the West Point Mint struck silver coins and used the "W" mint mark. It was originally produced in a set of 5 coins which included the silver eagle and the four gold eagle denominations (1/10 ounce - 1/4 ounce - 1/2 ounce - and 1 ounce). A total of 45000 sets were authorized but only 30125 proof sets were produced - making this the rarest and most valuable American Silver Eagle date - easily worth a few thousand dollars (for the silver eagle alone).