1794 Liberty Cap Half Cents : All Varieties 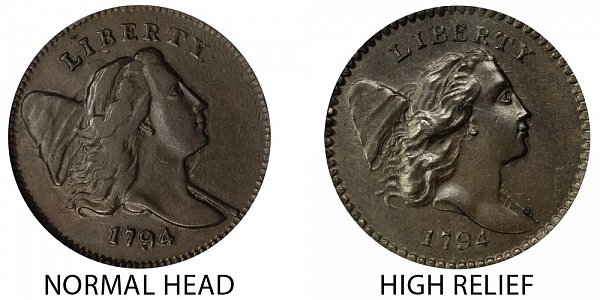 There were two major varieties of the 1794 Liberty Cap Half Cent (Penny). One variety was the Normal Head type in which the obverse was struck in a lower relief. The normal head has more and thinner denticles that encircle the rim of the coin. The other major variety is the "High Relief" type in which the coin was strongly struck much deeper. This resulted in details of the liberty "sticking out" further with deep details. The denticles along the rim are also thicker and there are fewer of them. The difference between the normal head (low relief) vs high relief varieties is depicted above in the example image of the coins. Source of example images are courtesy of Heritage Auction Galleries.