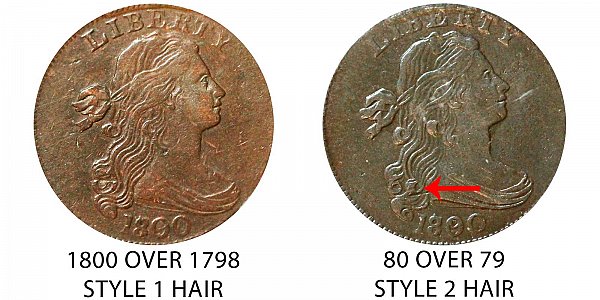 There were a few major varieties of the 1800 Draped Bust Large Cent (Penny). The first is the standard normal date without any overdate errors with the "Style 2 Hair". The other two varieties are 1800/79 overdate errors where the 1800 date was struck over a 1790's date resulting in the underlying "79" appearing under the "80".

In the 1800/1798 variety: The "7" appears under the "8" but the "9" does not appear much under the "0". Another feature that distinguishes this variety is the "Style 1 Hair" used on the liberty. This was the older design of the hair used on the liberty in 1798 and previous years. The "Style 1 Hair" lacks an additional curl of hair above the shoulder which was added later on.

In the 1800/79 variety: The "79" appears clearly under the "80" with the "9" being prominently seen within the "0". This variety also uses the "Style 2 Hair" which was first introduced to the liberty design in 1798 and used in all later years. This hair design features an extra curl of hair above the shoulder of lady liberty. The differences between both of these varieties are depicted above in the example comparison image of the coins.