1814 Capped Bust Half Dollars : All Varieties There were multiple varieties and errors for the 1814 Capped Bust Half Dollar. The most common variety is simply the Normal Date variety which featured no errors or special features - which is depicted above.

The first major variety is the 1814/3 Overdate Error in which an 1814 date was struck over an 1813 date on the die. This resulted in coins featuring parts of the underlying "3" appearing within and around the "4" as depicted in the example below: 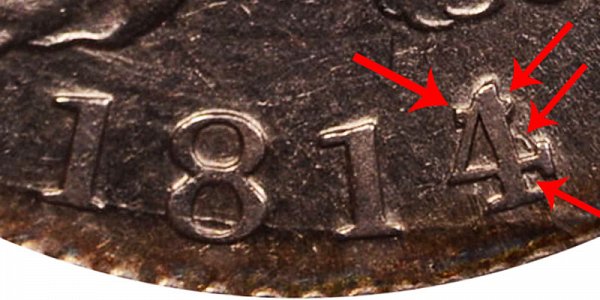 The next major variety features an error in the word "STATES" on the reverse of the coin. The engraver mistakenly engraved an "A" where an "E" should be. The error was then corrected with an "E" but the result was that some coins featured an underlying "A" seen within and just to the right of the "E" as depicted in the example below: 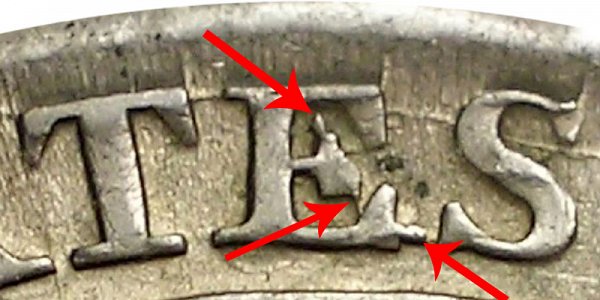 The last major variety features a single leaf on the branch under the eagle's wing - when typically there are two leafs. This was the result of die lapping that was used to correct existing die clashing problems on coins. This feature is depicted below in the example image comparing the normal double leaf vs single leaf: 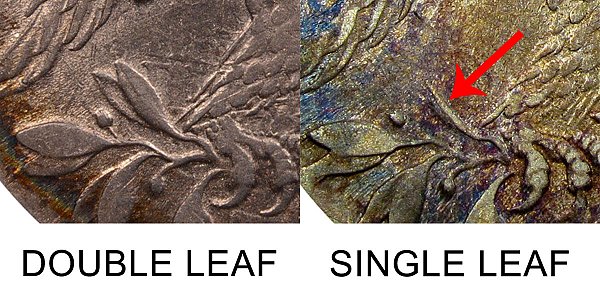 1814 Half Dollar: Single Leaf Below Wing

1812 Half Dollar: All Varieties

1812 Half Dollar: Single Leaf Below Wing