1823 Capped Bust Half Dollars : All Varieties 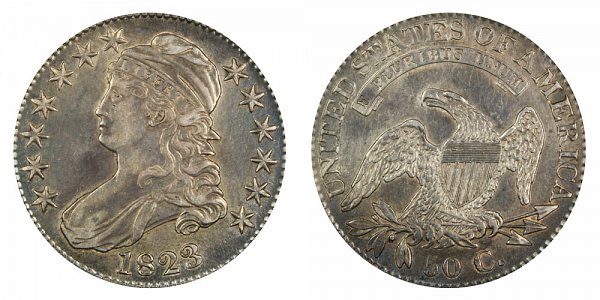 There were multiple varieties of the 1823 Capped Bust Half Dollar in regards to the number "3" in the 1823 date. The most common variety is simply the "Normal Date" or Normal 3 variety with no breaks nor any special features. The US Mint was updating the style of the number "3" and had many difficulties in getting it right. At one point the "3" became broken where the inner piece in the middle of the 3 (left side) broke out. This became known as the "Broken 3" variety (the rarest and most desirable variety) - but the outer gap at the middle of the 3 (right side) was not filled in - so this helps distinguish the varieties.

Eventually the "3" was patched up with a short blunt punch which resulted in a blob within the outer gap at the middle of the "3" - known as the "Patched 3" variety. Later on a die crack appeared at the rim of the coin and extended upwards which resulted in the right portion of the 3 cracking off. This resulted in an unusually shaped "3" with what looks like an extra bump on the upper-right half and the inner piece on the left side of the 3 is slightly different in shape as well. This became known as the "Ugly 3" variety.

A lesser-known variety features what looks like a patched 3 with a blob within the central gap on the outside of the "3" (right side) - but the central piece inside the "3" (left side) is still present and unbroken. The blob is actually due to a die chip and had nothing to with the Mint trying to repair a broken 3. This became known as the "Tampered 3" variety.

The difference between all 1823 capped bust half dollar varieties is depicted below in the example comparison image: 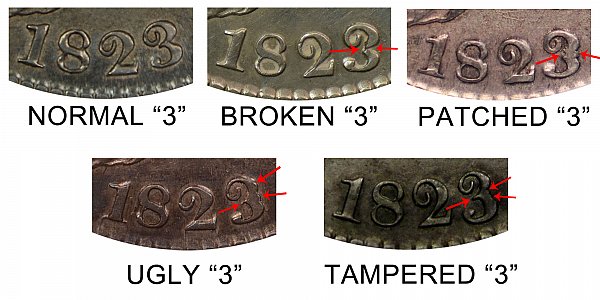 1823 Half Dollar: All Varieties

1822 Half Dollar: All Varieties