One very rare and major variety is the 2008-W "Reverse of 2007" Burnished Uncirculated American Silver Eagle. In 2008 there was a major design change on the reverse of the coin. Most burnished silver eagles of 2008 (533757 minted) have the newer design. Although a smaller number of them (47000 minted) still had the older design on the reverse of the coin - used in 2007 and in earlier years. This variety is one of the rarest and most valuable silver eagle varieties. The difference between the Reverse of 2007 vs Reverse of 2008 is depicted below in the example comparison image. Note the differences in the tilde between the words "SILVER" and "ONE" - also the differences between the letter "U" in "UNITED" and the general differences in the styling of all the other letters as well as the spacing between the lettering and the rim of the coin: 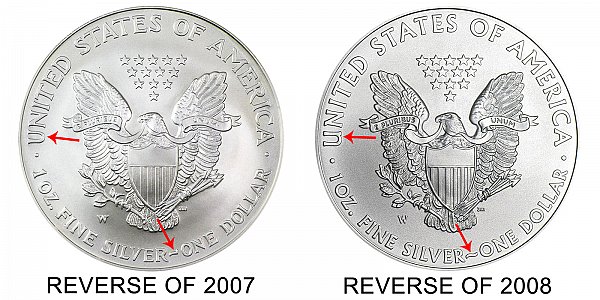