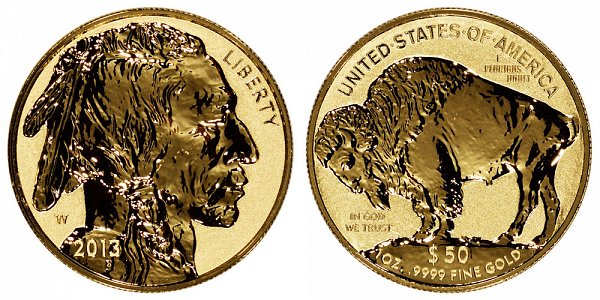 The 2013-W "Reverse Proof" Gold American Buffalo was the first US coin of its kind for the gold buffalo series. Only 47836 coins were sold before being discontinued. This coin was produced to commemorate the 100th anniversary of the Buffalo Nickel design produced by James Earle Fraser - as the coin was first released in 1913. This coin originally had a cost of $1640.00 - but sales were suspended on and off due to the volatile prices of gold in late 2008.

The reverse proof was produced at the West Point Mint using a highly innovative and technologically advanced minting process - which resulted in a coin with a frosty satin background field (like normal uncirculated gold buffalos) but the details and designs have brilliant mirror-like features. This coin also bears the "W" mint mark.