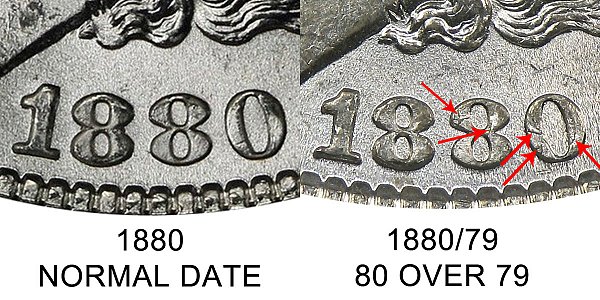 There were two major varieties of the 1880 Morgan Silver Dollar. The first and most common is the "Normal Date" variety which features the standard 1880 date without any major errors. The other variety is the 1880/79 Morgan dollar which features an 80 over 79 overdate. This variety can be very difficult to identify because the "79" doesn't appear within or around the "80". Instead it appears on the numbers itself. Parts of the top of the "7" can be seen on the upper-left portion of the "8" and the vertical bar from the "7" can be seen on the right side of the "8". Part of the "9" can be seen in the middle and bottom portions of the "0" as depicted below in the closeup example image. The difference between the 1880 normal date vs 1880/79 (80 over 79) Morgan dollar varieties is depicted above in the example comparison image. Note that these are just the major varieties - there are also many VAM varieties not listed here which could fall into one of these main categories.