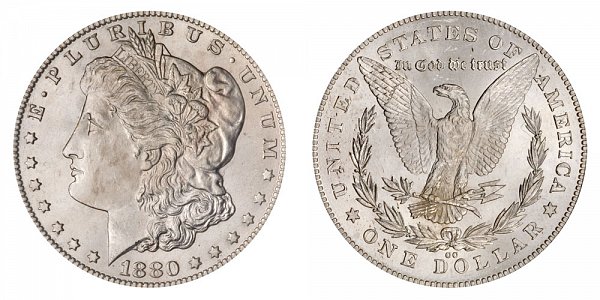 One major variety is the 1880 CC 8/7 Morgan Silver Dollar featuring the reverse of 1878 and also an 8 over 7 overdate from the Carson City Mint (sometimes this is known as VAM-7). Source of example image above is courtesy of Heritage Auction Galleries.

This variety also has an 1880 date struck over an 1879 date which resulted in parts of the underlying "7" being subtly visible towards the bottom portion of the "8". The easiest way to identify this variety is to recognize the small "dash" or bar from the bottom of the "7" visible just under the "8". Parts of the "7" are also barely visible within "8" in the bottom portion. Unlike the 1880/79 variety - There is no underlying "9" visible within nor around the "0" - which helps distinguish the varieties. The difference between the 1880/79 vs 1880 8/7 CC Morgan Silver Dollar varieties (both feature reverse of 1878) is depicted below in the example closeup comparison image: 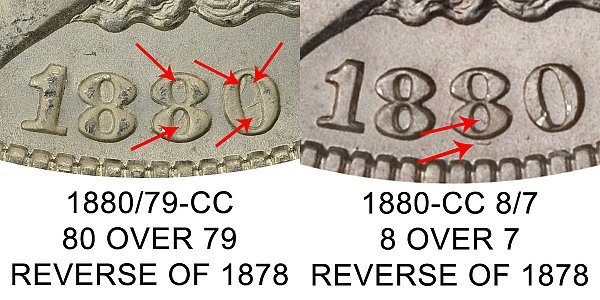 USA Coin Book Estimated Value of 1880-CC Morgan Silver Dollar (Reverse of 1878 - 8 Over 79 Variety) is Worth $195 in Average Condition and can be Worth $613 to $2,494 or more in Uncirculated (MS+) Mint Condition. Click here to Learn How to use Coin Price Charts. Also, click here to Learn About Grading Coins. The Melt Value shown below is how Valuable the Coin's Metal is Worth (bare minimum value of coin). Click here to see the Melt Value of every US Coin.