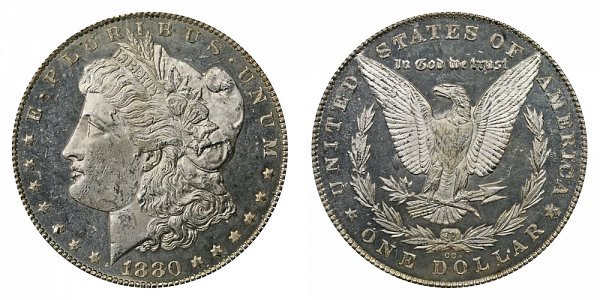 One major variety is the 1880 CC Morgan Silver Dollar featuring the reverse of 1879. Sometimes this is considered a "Normal Date" variety - although there is still a variation of an 8/7 (8 Over7 ) overdate from the Carson City Mint - many VAM varieties could fit into this category. Unlike the rest of the Carson City "Reverse of 1879" varieties - This variety features no parts of the underlying "7" within the "8" - the top and bottom spaces within the "8" are clear. The only evidence of a "7" is a very subtle small dash under the "8" (which is the bottom of the underlying "7").

The difference between the 1880 CC 8 Over 7 varieties (normal date vs low7 vs high 7) CC Morgan Silver Dollar varieties (all featuring reverse of 1879) is depicted below in the example closeup comparison image: