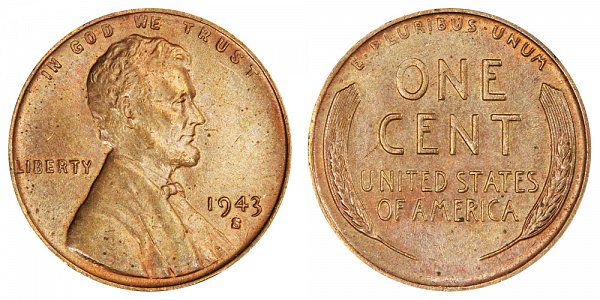 One of the rarest and most intriguing US coins is the 1943-S Bronze/Copper Lincoln Wheat Cent. Nearly all pennies from 1943 are supposed to be steel cents. However: A small number of copper planchets were left over from 1942 and were used in 1943 during the transition to steel planchets. The 1943 copper cent was produced at all three mints. However - Only 5 San Francisco-minted 1943-S Copper Cents are known to exist - making it rarer than the Philadelphia variety but more common than the unique Denver variety. Most experts believe that there are still a few yet to be discovered!

Beware of fake counterfeits - as this is one of the most counterfeited of all US coins. Some scammers will attempt to plate a 1943 steel penny in copper. A good test is to place the coin near a magnet. If the coin sticks to the magnet - then it has steel content and is therefore fake. Also to watch out for: Scammers will sometimes take a copper 1948 wheat penny and file down the left side of the "8" into a "3" - to trick people into believing it is the rare copper 1943 wheat penny.