Dennis R. Williams was born on October 26, 1952 in the city of Erie, Pennsylvania. Having an interest in art and sculpting throughout his childhood, he attended the Columbus College of Art and Design, located in Columbus, Ohio. Dennis Williams is most famously known for designing the Bicentennial Eisenhower Dollar. Back in October of 1973, the nation was prepared to honor and celebrate America's Independence on the 200th Anniversary of the founding of our nation. The US Treasury authorized a public contest for new Bicentennial designs to be temporarily depicted on the reverse of the US Quarter, Half Dollar and Dollar coins. Nearly 1,000 people submitted their designs, one of whom was Dennis Williams. In fact, the reason he designed this coin was because his instructor in College assigned him the National Bicentennial Coin Design Competition as his project!

The Bicentennial coin designing competition was open to every US Citizen, except those who were already sculptors working for the government. Dennis Williams was only 21 years old when he submitted his bicentennial coin design for the Eisenhower Dollar. After nearly half a year of artists and sculptors submitting their designs, the judges at the US Mint selected the three winners. William's design for the Eisenhower dollar won the competition, while Seth G. Huntington won the design for the Kennedy Half Dollar and Jack L. Ahr won the design for the Washington Quarter. Each of the winners received a $5,000 grand prize and their designs would be used on US coinage during the Bicentennial. 12 other semifinalists won $750, but did not have their designs produced on coins.

At the age of 21, Williams would be the youngest person in US history design US coinage. The obverse of the "Ike" Dollar would still depict the bust of US President Eisenhower, designed by Frank Gasparro, who was also the Chief Engraver of the US Mint at the time. The dual 1776-1976 date would be the only change to the coin. The new Bicentennial reverse would depict the Liberty Bell superimposed in front of the Moon. It was a fitting design for this coin because the original reverse depicted the Apollo 11 insignia of the eagle landing on the moon, which was to honor this great achievement. After all, Eisenhower is the US President responsible for starting the US space program and NASA. The text "UNITED STATES OF AMERICA" and "ONE DOLLAR" were displayed along the rim while our motto "E PLURIBUS UNUM" was placed just below the moon and to the right of the Liberty Bell. The "DRW" initials of Dennis R. Williams is also displayed just below the Liberty Bell. 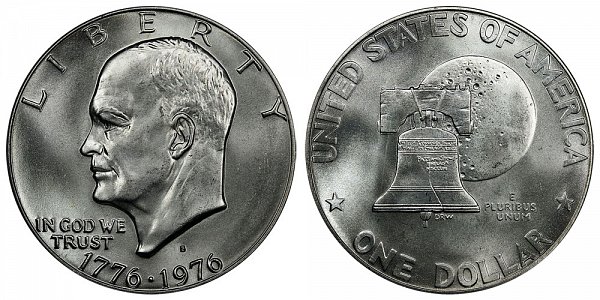 Design of the Bicentennial Eisenhower Dollar. Reverse with Liberty Bell against the Moon designed by Dennis R. Williams.

After the winners were selected, they were invited to the White House and Treasury on April 24, 1974. They collected their $5,000 prize at the Treasury as well. Dennis Williams was still just a student in his junior year at the Columbus College and majoring in sculpting. He stated that he was going to use his winning prize money to help fund and continue his education. He said eventually, he would like to become a sculpting teacher later on in his career.

A few months later on August 12, 1974, Dennis and the other winners were then invited to the Philadelphia Mint where they would ceremonially operate the minting machines and be the first to produce the new bicentennial coins. Dennis struck the first Eisenhower dollar bearing his own design. These were very special and extremely scarce prototype coins without mint marks. They were meant just for exhibition and would not be used for general circulation. It wouldn't be until 1975 when general production of these coins would begin.

The first coins produced for the bicentennial were dollar coins in February of 1975, the ones that had the new reverse designed by Williams. These coins were not authorized to be released until July 4, 1975 and they would be produced for two years, through all of 1975 and 1976. The Dollar coin was the last of the bicentennial coins to be released to the public in October, coinciding with a ceremony. Nearly a quarter billion of these dollars were actually produced. The US Mint wanted as many of these minted as possible, to give every US citizen the opportunity to own these coins and have a remembrance of the US bicentennial.

The West Point Mint had to assist Philadelphia in producing such a vast number of coins. Many of them were struck in West Point, but do not bear their "W" mint mark. They were produced using the copper-nickel clad composition of 91.67% copper and 8.33% nickel. 11 million Silver Bicentennial Eisenhower Dollars were also produced at the San Francisco Mint, but were meant to be collected as collectibles, not general circulation. These coins contain only 40% silver with 60% copper. Only a decade before this, the US had stopped producing silver coins because the melt value of silver coins was worth more than the face value of the coin itself. The prices of silver were so high that people began hoarding and melting silver coins.

During the production of William's bicentennial Eisenhower Dollar, there were two major different designs known as Type I and Type II. The first type was originally produced with bolder lettering. During production, the Mint noticed that copper-nickel clad coins were being struck indistinctly. The design on the coin wasn't as clear and resulted in a faint design. The silver coins didn't have this problem because the silver alloy metal was softer. Frank Gasparro slightly re-designed the Type 1 design with sharper and narrower lettering, which helped in the minting process. It turns out that all Eisenhower dollars in 1975 proof sets are Type 1 and all Eisenhower dollars in 1976 proof sets are Type 2. There were no known Type 2 silver coins struck in San Francisco.

After the Bicentennial year ended, all bicentennial coinage was restored to their original designs starting on January 1, 1977. Frank Gasparro's reverse on the Eisenhower dollar was restored to the eagle landing on the moon. Dennis William's coin design started as a humble school project and rose to become one of the most legendary and most collected coin designs in US history.