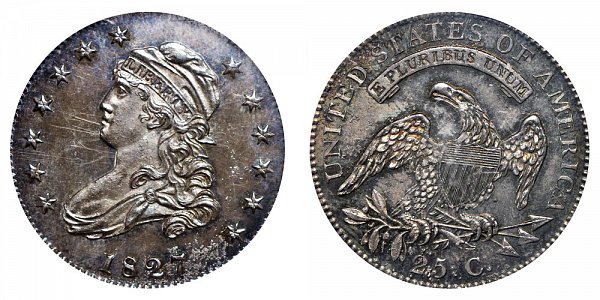 All 1827 Capped Bust Quarters are extremely rare and valuable. There were two major varieties: One was an original strike and the other was a Restrike. The variety depicted above is the restrike variety.

Two Restrike Versions: There were two types of restrikes classified as Period One (Class 2 / II) and Period Two (Class 3 / III). All restrikes appear to have a die crack through the letter "U" in "UNITED" on the reverse of the coin and all restrikes are said to have been struck in the late 1850s - but not all experts agree on this. Only a handful of restrikes are known in both silver and copper pieces.

Period One (Class II) coins were struck over bust quarters and have very little rust. Some theories say they were actually struck in the 1830s due to the availability of bust quarters and the dies still being in good shape. Period Two (Class III) restrikes are easily identified by a very gritty surface on both sides of the coin which was the result of very rusted dies. Some experts believe these coins were struck decades later in the 1850s because it would have taken time for the dies to get severely rusted compared to the smooth Period One (Class II) coins. 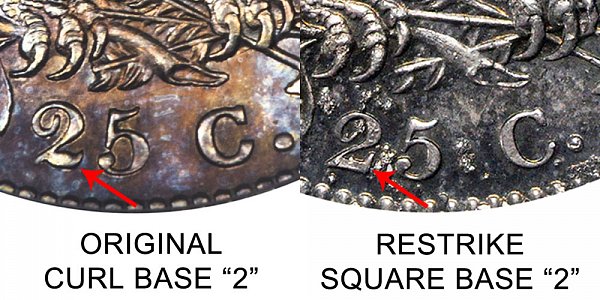