There were 4 major varieties of the 1839 Coronet Head Large Cent (Penny) related to the design of the liberty head on the obverse of the coin. Depicted above is an example visualization comparing the differences between the 1839/6 Head of 1836 vs the Head of 1838 varieties. In addition are the newer 1839 portrait designs of the Silly Head vs Booby Head - all seen in one image. Note the size of the hair line relative to the "LIBERTY" crown in each variety as well as the features depicted by the arrows unique to each variety. Click the image above to enlarge.

The first variety is the 1839/6 overdate error which also features the "Head of 1836" which is the oldest of the designs. The 1836 head features plain cords tying up the back of liberty's hair. This is the only major variety with plain cords as the rest were beaded cords. The 1839 date was struck over an 1836 date which resulted in part of the underlying "6" appearing within the "9". This is the rarest and most valuable of all of the varieties.

The second variety is the "Head of 1838" design which features the older liberty portrait design from the year before. Unlike the newer Silly Head and Booby Head designs - this design lacks a lock of hair on lady liberty's forehead.

The next design is the Silly Head variety. This design features the addition of a lock of hair on the forehead and also more hair above the crown. 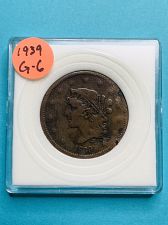 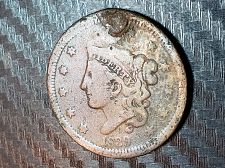 1839-P Cornet Liberty Head large cent
A great coin to add to your collection.
$18.00
Free Shipping
Seller: UpFront2
Condition: Good coin The coin pictured is the coin you will receive.