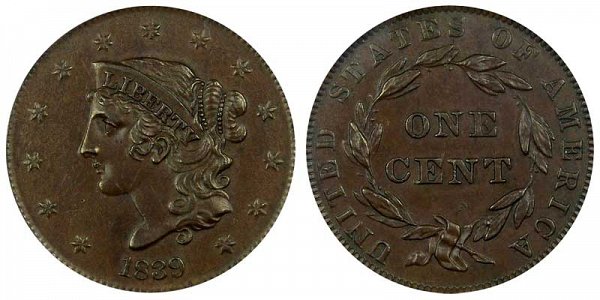 One major variety of the 1839 Coronet Head Large Cent (Penny) includes the "Booby Head" design of the portrait of lady liberty on the obverse of the coin. This is one of the newer designs of the liberty head introduced in 1839. This coin can be best identified by the addition of a lock of hair on the forehead and also the raising of the hair line above the "LIBERTY" crown. The most recognizable feature is the addition of the shoulder tip on the liberty portrait which was not included in the "Silly Head" design. Another easy way to distinguish the difference between the Silly Head vs Booby Head is by observing the number of beads on the first strand of beads (closest to the front of the head). The Booby Head design will have many more beads - or around 11 beads while the Silly Head will have around 7 beads.

USA Coin Book Estimated Value of 1839 Coronet Liberty Head Large Cent (Booby Head Variety) is Worth $29 in Average Condition and can be Worth $752 to $1,225 or more in Uncirculated (MS+) Mint Condition. Click here to Learn How to use Coin Price Charts. Also, click here to Learn About Grading Coins. The Melt Value shown below is how Valuable the Coin's Metal is Worth (bare minimum value of coin). Click here to see the Melt Value of every US Coin. 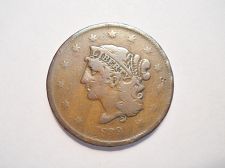