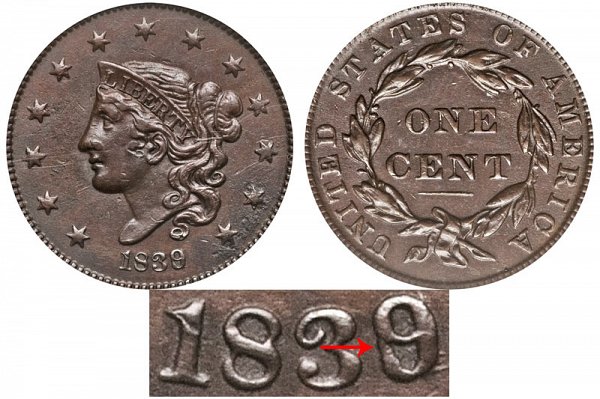 One major variety of the 1839/6 Coronet Head Large Cent (Penny) includes the "Head Of 1836" design of the portrait of lady liberty on the obverse of the coin. This is the oldest design of the 1839 varieties which features the liberty portrait used in 1836. The most notable feature to distinguish this variety from the others is the cords on the back of the liberty's hair are "plain cords". The newer designs featured "beaded cords". In addition: This variety is also an 1839/6 overdate error in which the 1839 date was struck over an 1836 date which resulted in part of the underlying "6" being visible within the leading "9" as depicted by the arrow in the example image above. This is by far the rarest and most valuable 'major' variety in the entire Coronet Head Large Cent series.

USA Coin Book Estimated Value of 1839 Coronet Liberty Head Large Cent (9 Over 6 - Plain Cords Variety) is Worth $507 in Average Condition and can be Worth $68,372 to $99,881 or more in Uncirculated (MS+) Mint Condition. Click here to Learn How to use Coin Price Charts. Also, click here to Learn About Grading Coins. The Melt Value shown below is how Valuable the Coin's Metal is Worth (bare minimum value of coin). Click here to see the Melt Value of every US Coin.