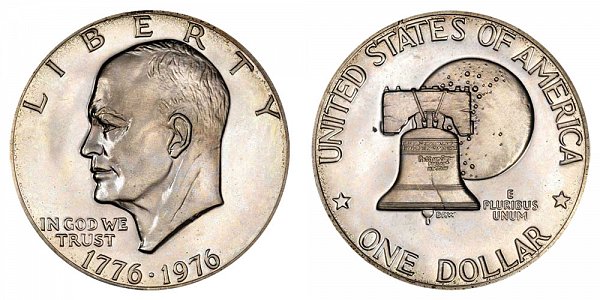 This is the unique 1976 "No S" Type 2 Silver-Clad Bicentennial Eisenhower Dollar - Only 1 coin is known to exist! The image above depicts that very same exact coin. Source of example image is courtesy of PCGS.

The story of this coin begins on August 12 of 1974 when the three winning designers of the three bicentennial coins were allowed to have their coins struck for the first time. These coins would only be trial versions before the coins were issued to the public. The trial coins were struck at the Philadelphia Mint - which is why there wasn't an "S" mintmark on them. They were later sent to the ANA Convention in Florida to be presented to the public. Mint Director Mary Brooks indicated that these "No S" coins were destroyed once they returned to the Mint and were replaced with coins with an "S" mint mark.

The US Mint has confirmed that the Philadelphia Mint did produce earlier Type 1 proof coins for presentation and trial versions. In mid-1975 - Frank Gasparro (US Mint Chief Engraver) contacted Denis Williams (winning designer of the bicentennial Eisenhower Dollar reverse) and requested permission to change the design of the reverse of the coin to improve the quality and efficiency of coin production at the mint. The big change was that the lettering on the reverse was altered into narrower and thinner letters with a high relief strike. This would be known at the Type 2 reverse. The US Mint never mentioned whether the Philadelphia Mint produced this later Type 2 proof dollar - so it remains a mystery!

There is a logical theory about how this unique coin came to be. When Frank Gasparro consulted Williams - it's very likely that he struck a test version or a trial piece of the Type 2 Eisenhower dollar at the Philadelphia Mint - just to see if the new design would work properly. Another theory is that Mary Brooks (US Mint Director at the time) could have ordered the production of special promotional and presentation sets of the Type 2 dollar as well - "No S" coins produced in Philadelphia. The coin could have been presented to a Congressman or high level official in Washington.

This coin was actually discovered in 1977 at a department store called Woodward and Lathrup - located in the Washington DC area. It's possible that whoever had this coin (possibly a member of Congress?) spent it at the store assuming it was just a regular old Eisenhower dollar and didn't realize that this coin was actually a unique one-of-a-kind piece! The coin is now owned by Mitchell Spivack - Modern Coin Expert. He considers this coin to be the rarest and most special non-error modern US coin in history - especially considering that this coin also happens to commemorate the 200th anniversary of our nation.