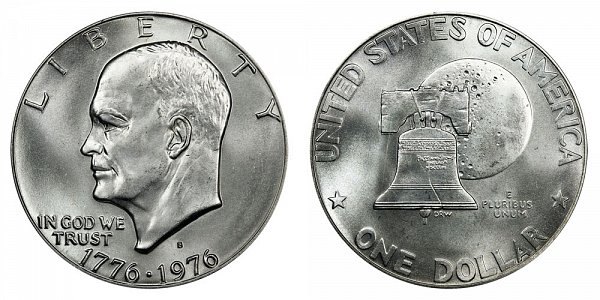 This is the Type 1 1976 S Bicentennial Eisenhower Dollar in 40% Silver-Clad composition. This coin features a 1776-1976 date on the obverse and a portrait of the Liberty Bell in front of the Moon to celebrate the 200th anniversary of the United States of America and President Dwight D. Eisenhower's work in starting the US Space Program which led to the Apollo 11 Moon landings. This coin was produced in both years of 1975 through 1976 so there were no 1975 coins. 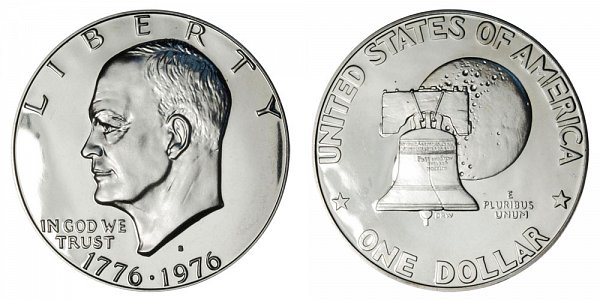 USA Coin Book Estimated Value of 1976-S Eisenhower Dollar (40% Silver - Type 1 - Low Relief - Bold Lettering Variety) is Worth $22 or more in Uncirculated (MS+) Mint Condition. Proof coins can be worth $23 or more. Click here to Learn How to use Coin Price Charts. Also, click here to Learn About Grading Coins. The Melt Value shown below is how Valuable the Coin's Metal is Worth (bare minimum value of coin). Click here to see the Melt Value of every US Coin.