The Type 1 obverse is the earlier design used on the front of the Trade Dollar from 1873 through 1876. The Type 2 obverse is a newer design used starting in 1876 and all later years. It is fairly easy to distinguish the difference between the two varieties. The Type 1 design features only three fingers on Liberty's extended hand holding a branch - whereas the Type 2 design features four fingers on the hand. Another feature to look at is the scroll or banner bearing the word "LIBERTY". The bottom ends of the scroll points towards the left on the Type 1 design - whereas the ends of the scroll hangs downwards on the Type 2 design. The difference between the Type 1 Obverse vs Type 2 Obverse is depicted above in the example comparison image. 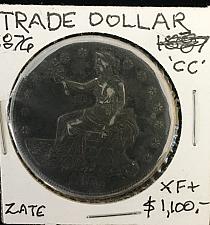