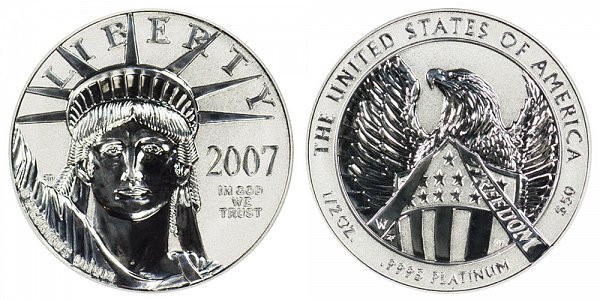 The 2007-W "Reverse Proof" American Platinum Eagle was the first US coin of its kind ever made. 30000 of these coins were authorized to be produced in a 2-coin set containing a 1/2 oz proof coin and a 1/2 reverse proof. Only about 19583 sets were sold before being discontinued. This coin was produced as part of a 2-coin platinum eagle set to commemorate the 10th anniversary of the American Platinum Eagle series (which started in 1997).

The reverse proof was produced at the West Point Mint using a highly innovative and technologically advanced minting process - which resulted in a coin with a frosty satin background field (like normal uncirculated platinum eagles) but the details and designs have brilliant mirror-like features. This coin also bears the "W" mint mark.