There were two major varieties of the 1829 Coronet Head Large Cent (Penny). One variety has large letters on the reverse while the other had medium sized letters. One major feature is that in some cases the letter "A"s will be filled in with the medium letter variety and the last "A" in the word "America" is slightly subtly doubled. The underlying doubled "A" can be slightly seen towards the left side of the letter. These features and the difference between the Large Letters vs Small Letters can be seen in the example comparison image above. 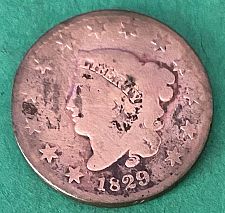