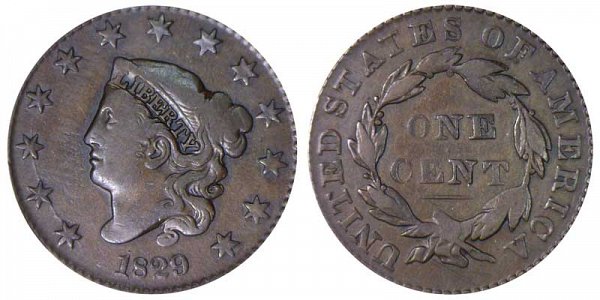 One major variety is the 1829 Coronet Head Large Cent (Penny) with Medium Letters on the reverse of the coin. The letters around the rim of the reverse are smaller. One of the most notable features is the three letter "A"s in the words UNITED STATES OF AMERICA. In some cases the inside of the "A" will also be filled in as depicted below. The last "A" in the word "AMERICA" is also slightly doubled and parts of the underlying "A" can be seen just to the left of the letter. The difference between the Large Letters vs Medium Letters is depicted below in the example comparison image of both coins:

USA Coin Book Estimated Value of 1829 Coronet Liberty Head Large Cent (Medium Letters Variety) is Worth $34 in Average Condition and can be Worth $7,129 to $11,842 or more in Uncirculated (MS+) Mint Condition. Click here to Learn How to use Coin Price Charts. Also, click here to Learn About Grading Coins. The Melt Value shown below is how Valuable the Coin's Metal is Worth (bare minimum value of coin). Click here to see the Melt Value of every US Coin.