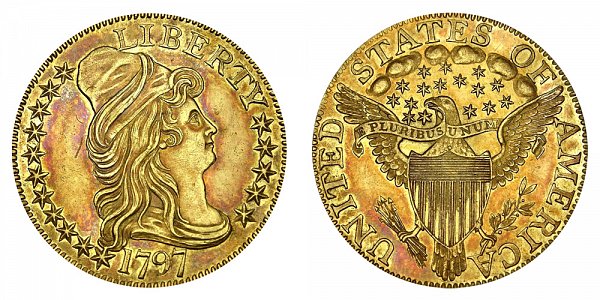 There were a few major varieties of the 1797 $5 Gold Half Eagle. The most common variety is the 1797/5 overdate. However: Two unique 1797 coins were struck with no overdate - One of them features 15 stars while the other features 16 stars on the obverse of the coin - only 1 of each coin was ever struck and both coins are held at the Smithsonian National Numismatic Collection. Depicted above is the "16 Stars" variety. Source of example image is courtesy of the National Numismatic Collection at the Smithsonian Institute.

The 16 Stars variety has a long and under-appreciated history. This is a one-of-a-kind coin but was ignored by numismatists when it appeared in the Col. Green Estate. It first appeared at auction in Stack's "Flanagan" Sale - where the famous 1933 Double Eagle was also up for a first-time auction and the Federal Government demanded it's return. Many prominent collectors attended the auction and the 1933 was the "star of the show" - and the ignored Unique 1797 half eagle only sold for $625

Later in 1944: this coin was up for auction at Stack's "Bell" auction and then in 1945 it appeared in the Stack's "Hall" auction where it was sold to the Baldenhofer Collection. 10 years later at Stack's "Baldenhofer" auction - the coin was sold again for the same (extremely undervalued) $625 price to Josiah K. Lilly Collection. It was eventually acquired by the US Government and placed in the Smithsonian National Numismatic Collection. This is a priceless coin and is likely worth over $1 million - much more than $625!

The difference between the 15 Stars vs 16 Stars (Large Eagle) is depicted below in the example comparison image. Note that both of these unique coins do not have the 7 Over 5 overdate in the date: 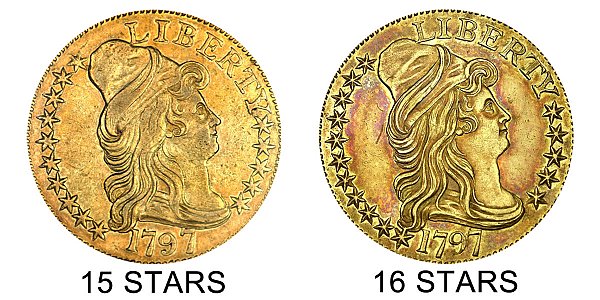